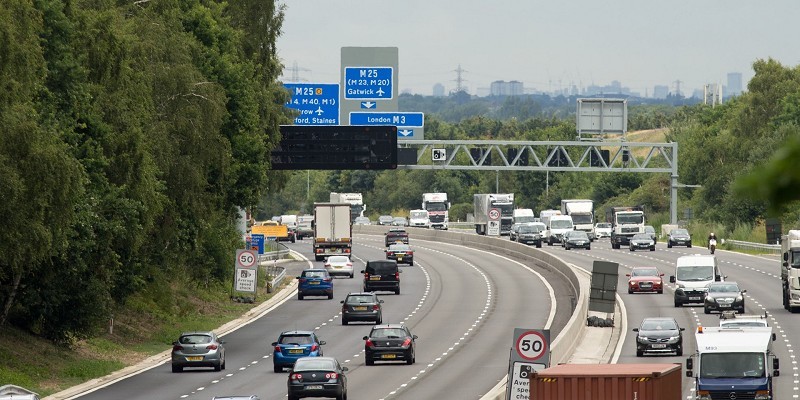 What is a smart motorway and are they dangerous?

Since the early 2000’s, the government has been introducing smart motorways across the country in a bid to reduce congestion and make our journeys smoother and safer. But what is a smart motorway? They are becoming part of our journeys on a daily basis, but are they more dangerous than a traditional motorway and how can we ensure they are used effectively? In October 2019, Highways England stated that by 2025, there will be an additional 300 miles of smart motorway without a hard shoulder, so it is essential that all drivers know what they are and how to use them properly.

The frustration of being stuck in a traffic jam is something most drivers experience, whether you’re stuck in traffic every day on your commute to work, or are in stationary traffic on your way to an important event. There is no doubt that every driver in the UK would welcome a system that could reduce the amount of times they are late for work, could stop them missing important meetings and gets them home to their families quicker - so are smart motorways the answer?

A smart motorway is primarily a traffic control system, that makes the hard shoulder available to use as a traffic lane, at certain times of the day or night. This is particularly useful in congested areas and some can be opened or closed depending on the flow of traffic, or stop traffic from entering a lane completely if there has been an accident up ahead. Opening the hard shoulder adds over 4,000 miles of road for vehicle use, which spreads the flow of traffic therefore reducing congestion, which is certainly a positive for motorway drivers in the UK as well as drivers on other minor roads who see less traffic and congestion as a result.[1]

The first smart motorway to be opened was the M42 in 2006, although then it was known as a ‘managed motorway’.[2] Highways England have monitored the M42 since the smart motorway was introduced and during that time, journey reliability has improved by 22%, personal injury accidents were reduced by more than half and when accidents did occur – the severity was much lower[3].  Another positive point about smart motorways is that they reduce emissions, which makes our journeys kinder to the environment by slowing us down and spending less time in traffic. It could be argued that this is only by a very small amount, but anything we can do to reduce the environmental impact of our journeys is a positive thing.

The primary reason smart motorways have been introduced is to reduce congestion, especially in the busiest areas of our motorway network. The cost of motorway congestion in England alone is an estimated £2 billion each year, so there are clear economical and financial benefits if this can be reduced. Additionally, another aim of the smart motorway network was to make journeys more reliable. To do this, smart motorways use class-leading technology to monitor congestion levels and introduce speed limits, warning signs and lane closures to attempt to keep traffic flowing and drivers happy. It is important that drivers adhere to the speed limits in place and check for any warning signs indicating there may be an incident up ahead - by doing this, drivers will have more reassurance that their predicted journey time is as accurate as possible.

So, what is the controversy around Smart Motorways?

There are some elements of smart motorways that have raised concerns with drivers - one of the main worries is the lack of a hard shoulder lane on long stretches of motorway. According to the RAC’s Report on Motoring 2019, 68% of people said that removing the hard shoulder compromised safety,[4] so there is some work to do in order to gain the public’s confidence that this system is effective. Some hard shoulders lanes are now ‘All running lanes’ meaning there is no hard shoulder at all on that particular stretch of motorway.

Although most of us travel every day without any problems, there is a subconscious feeling of security that if you did need to stop in an emergency, the hard shoulder is available. On the stretches of motorway without a hard shoulder lane, there are Emergency Refuge Areas (ERAs), but if an incident were to occur when you weren’t near an ERA, there are very little options available to stop safely, therefore it is understandable that there are concerns surrounding this issue. Smart motorways also have more speed cameras than traditional motorways, which monitor the variable speed limits when they are in place, however, they are in operation at all times and can catch drivers that are travelling faster than the national speed limit. This has prompted criticism that Smart Motorways are a loosely veiled attempt to collect more revenue from motorists in speeding fines.

Some hard shoulder lanes are only open for traffic use at certain times, and it is important to be aware of this when using a smart motorway. While travelling, you may see a red ‘X’ in the hard shoulder lane, this means the lane is not in use and you must not travel in that lane for any reason as there may be an accident or obstruction up ahead, it can even be to allow emergency vehicles to pass more easily. If you are caught driving in a lane with a red ‘x’ above it, you can get a £100 fine and 3 points on your licence automatically.

What is the future for the Motorway?

Ultimately, for all of this to come together, the smart motorway system has to work effectively. Part of this is drivers understanding how to use them and implementing this on a daily basis. It could be argued that it is not the smart motorway system that is dangerous, but the drivers who refuse to obey the limits or warnings that are put in place.

Although there are several arguments to be made for and against the smart motorway network, there is no denying that the system is here to stay in some form. With the number of cars on our roads increasing, it’s clear that something must be done to improve the quality of our roads and reliability of our journeys, so being being educated on the correct use of smart motorways is essential to ensure our journeys are as safe, and stress free as possible.